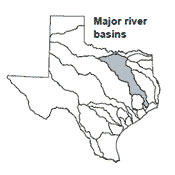 The Trinity Basin is the largest river basin whose water-shed area is entirely within the State of Texas and the third largest river in Texas by average flow volume.  The basin's namesake river was named La Santisima Trinidad, "the Most Holy Trinity," by early Spanish explorers.  From the confluence of its Elm and West Forks near Dallas, the Trinity River flows to Trinity Bay, which drains to the Gulf of Mexico.  Smaller streams within the basin include the Clear, East, Elm, and West forks of the Trinity River and Cedar, Chambers, and Richland creeks.

The Dallas-Fort Worth metropolitan area is located in the upper basin.  In the lower basin, water is exported to the Houston area.  Water supply demands in both metropolitan areas are increasing.  As a result, balancing environmental requirements with these demands is an important issue in the basin.