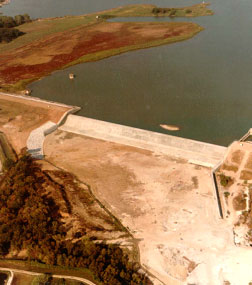 Lake Worth is located in the west of City of Fort Worth in Tarrant County, on the West Fork of the Trinity River, the upper stream of the Trinity River. The lake is owned and operated by the City of Fort Worth for municipal water supply and recreational purposes. Construction on Lake Worth Dam started in 1912. Deliberate impoundment of water began June 1914 and the dam was completed in October 1914. The design engineer for the project was John B. Hawley.

There is no design to store floodwater. Remedial measures were taken in 1979 to modify the dam and spillway. Repairs included placing a concrete overlay on the spillway crest. This required removing some of the old concrete and replacing a minimum of 8-inch thick concrete. The design drawings called for the crest elevation to be 594.0 ft. In 1997 the crest elevation of the dam's embankment was raised to 609.5 ft. in order for the spillway to be able to pass the probable maximum flood without the dam's embankments being overtopped. The drainage area above the dam, including the area drained by Eagle Mountain and Bridgeport reservoirs, is about 2,064 square miles. According to the TWDB 2001 volumetric survey, the lake has a storage capacity of 33,495 acre-feet with a surface area of 3,458 acres at its conservation pool elevation of 594 feet above mean sea level.