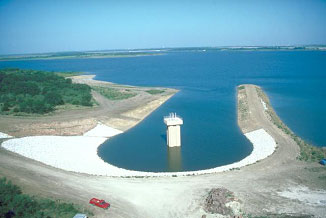 Joe Pool Lake (formerly Lakeview Lake) is located in the southern part of the Dallas - Fort Worth Metroplex encompassing parts of Tarrant, Dallas, and Ellis counties, on Walnut Creek and Mountain Creek, which is a tributary of the Trinity River. Joe Pool Lake was named after Joe Pool, a congressman from the Oak Cliff area of Dallas who represented this district from 1963 until his death in 1968. Pool was highly influential in the passage of legislation and funding of the lake. The project to build Joe Pool Lake initiated by a promise made in 1961 by Joe Pool and was carried out by a citizens committee called the Lakeview Planning Council.