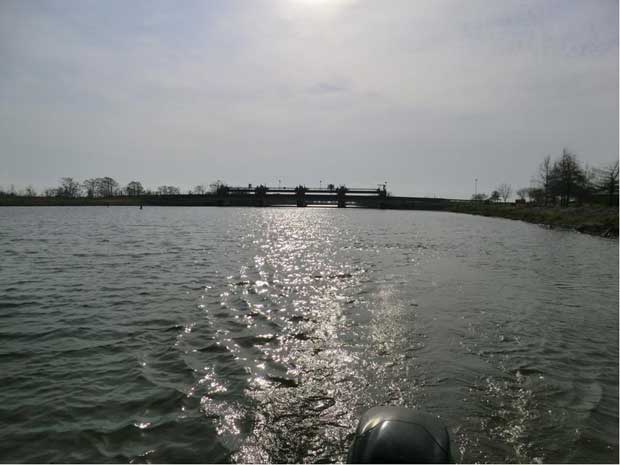 Wallisville Lake Project (now called as Wallisville Saltwater Barrier) is located near Wallisville in Chambers County, on the main stem of Trinity River.  It is owned by the United State Government and operated by U. S. Army Corps of Engineers for five purposes: navigation, salinity control, water supply, fish and wildlife enhancement, and recreation.  Efforts to construct a saltwater barrier (or reservoir as originally designed) at Wallisville on the Trinity River began in 1952.  Congress first authorized the construction of the project through the River and Harbor Act of October 22, 1962.  The government purchased the property and construction began in 1966.  At this point, the project would have been a 19,700 acre reservoir with surface elevation of four feet above mean sea level.  A contract for water supply, salinity control, and recreation was signed between the U.S. Army Corps of Engineers, the Trinity River Authority, the Chambers-Liberty Counties Navigation District, and the City of Houston and was approved by the Secretary of the Army on February 2, 1968.  In September 1971, a lawsuit was filed by the Sierra Club in U.S. District Court against the construction of the project.  At approximately 72 percent complete, the construction was halted in 1973 by a summary judgment decision of the court. Between 1973 and 1987 the project was revised and reevaluated.  And in May of 1987 the Fifth Circuit Court of Appeals dismissed the lawsuit in favor of the government and lifted the injunction against continuing construction.  Then in November of 1989 a pair of nesting bald eagles was discovered near Miller Lake and the project was reevaluated again.  It was this reevaluation that gave rise to the project as it stands today: a set of levees along the east and west banks of the Trinity in conjunction with the dam across the Trinity, the navigation lock and engineered navigation channel, the gated control structure on main stem of the Trinity, Structure A in the Cut-Off near Pickett's Bayou, Structure B at the head of Lost River, and parks and recreation areas.  The original 39,000 feet long concrete dam structure across the marsh was abandoned after it was breached in 2001 to allow for normal water flows of the Old River and several smaller streams and bayous.  Modifications resulted in a saltwater barrier project, with no reservoir pools, to emulate pre-project conditions as closely as possible. The project includes approximately 8 miles of earthen dam and an overflow spillway with a Tainter Gate assembly, and an 84 by 600 feet navigation lock with a sill depth of 16 feet for commerce and pleasure craft use.