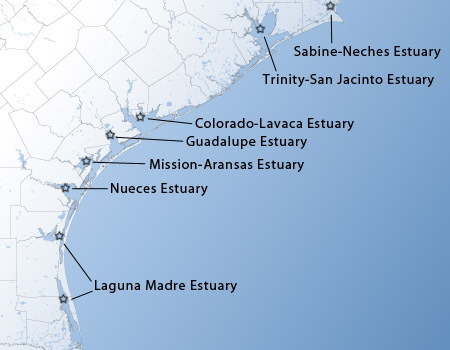 Major estuaries in Texas are named for their primary contributing rivers.  For example, the Colorado-Lavaca Estuary is named for the Colorado and Lavaca rivers, though most of us refer to this estuary as Matagorda Bay.  Similarly, Galveston Bay is the name we commonly use when referring the region encompassed by the Trinity-San Jacinto Estuary.  In all cases, the name of the primary or central bay of an estuary is the one most typically used, even though numerous other secondary or tertiary bays, bayous, inlets, creeks, marshes, etc. make up the estuary.

Our seven major estuaries, in order from the Louisiana border down to the Mexican border are listed below.  More information about each major estuary can be found on their specific page.