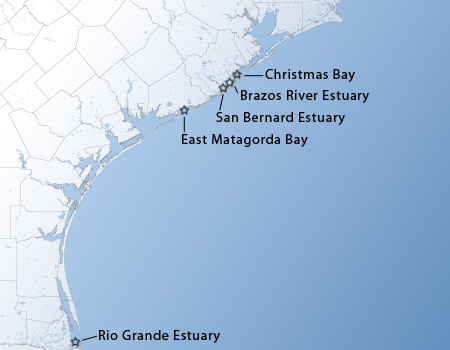 Minor estuaries in Texas are smaller, less complex systems which are nestled among the major bay systems.  These minor estuaries include: Christmas Bay (located at the southwestern edge of the Galveston Bay system), Brazos River Estuary, San Bernard Estuary (the San Bernard River and Cedar Lakes complex), East Matagorda Bay, and the Rio Grande Estuary.  More information about each minor estuary can be found on the specific estuary page (see below).

River estuaries represent a special type of minor estuary.  These estuaries are not bounded by barrier islands and therefore do not contain an embayment as in other estuaries.  Instead, river estuaries are the tidally influenced portion of the main river channel which has a direct connection to the Gulf of Mexico.  River estuaries may happen to include small inlets, creeks, or marshes, but in general are smaller and more dynamic than larger bay complexes.  In Texas, the tidal portion of the Brazos and Rio Grande are distinct river estuaries, whereas the San Bernard river estuary is closely associated with the Cedar Lakes complex.  While all estuaries depend on freshwater inflow to maintain a balance, river estuaries face a unique risk in that water diversion, sediment deposition, or low flow conditions may result in closing the river mouth and cutting off the estuary.  This situation occurred in the Rio Grande Estuary in 2001.