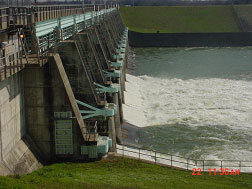 Lake Ray Hubbard (also known as Rockwall-Forney Dam), formerly Forney Lake, is located just north of Forney about fifteen miles east of Dallas and extends into the counties of Dallas, Kaufman, Collin, and Rockwall, on the East Fork Trinity River, a tributary of the Trinity River. The dam is currently owned by the City of Dallas and operated by Dallas Water Utilities, a not-for-profit department of the City of Dallas for purposes of municipal and industrial water supply, flood control, and recreation.

The Lake was originally named Forney Lake for the nearby town of Forney. After the City of Dallas incorporated the lake, it was renamed after a living person, Ray Hubbard, who presided over the Dallas Parks and Recreation System board from 1943 to 1972. The permit was issued on March 6, 1959 and land was purchased on September 17, 1963 for the reservoir where originally was a small lake named Corder Lake. Construction of dam was started on June 13, 1964 by general contractors, the S. and A. Construction Company and the Markham, Brown and M. C. Winter Construction Company. The Dam was closed in September, 1967 and deliberate impoundment began on December 1, 1968.