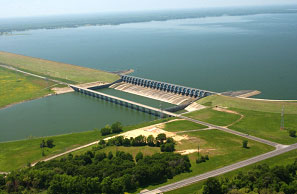 Richland-Chambers Dam and Reservoir (formerly Richland Reservoir) are located approximately twenty miles southeast of Corsicana, on Chambers Creek and Richland Creek which is a tributary of the Trinity River. The reservoir, extending into Navarro County and Freestone County, is the third largest inland reservoir by surface area and the eighth largest reservoir by water volume to lie entirely within the state of Texas.

Richland-Chambers Reservoir is owned and operated by Tarrant Regional Water District for water supply, flood control, irrigation, and recreation purposes. After a drought in 1950's, plans were made by the Tarrant Regional Water District to build the Richland-Chambers Reservoir which inundated Lake Corsicana. However, no actions were taken until October 1, 1979 when the water district issued $342.75 million in revenue bonds for construction. Dam construction began in October of 1982. Deliberate impoundment of water began on July 14, 1987. The reservoir was completed in November of 1987 and was filled-up by May 1989. On November 12, 1988 the Richland-Chambers Reservoir started to transport water to Lake Benbrook for water supply to Tarrant County area. Richland-Chambers Dam is an earthen embankment with a soil cement upstream face and six and half miles long with a maximum height 120 feet. The top of dam is at the elevation of 330 feet above mean sea level. The spillway is located at station 133 of the dam, approximately one mile north of the
original Richland Creek, and is a type of concrete ogee weir of 960 feet in length at the crest elevation of 290.0 feet above mean sea level. On the crest it is controlled by 24 tainter gates with the top at an elevation of 325 feet above mean sea level. According to the 2007 TWDB survey, at the top of the conservation pool, at an elevation of 315 feet above mean sea level, the reservoir stores 1,112,763 acre feet of water and creates 43,384 acres of water surface. The dam controls a drainage area of approximately 1,957 square miles. The reservoir does not has a flood control pool but allowed a surcharge of 2 feet above conservation pool. At this elevation, 317 feet above mean sea level, the reservoir can temporarily hold a total of approximately 1,211,263 acre feet of water encompassing a surface area of 45,500 acres.