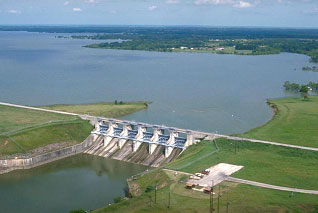 Navarro Mills Lake and dam are located about sixteen miles southwest of the city of Corsicana in Navarro County, on Richland Creek, a tributary of the Trinity River. Navarro Mills Lake is owned by the U.S. Government and operated by the U.S. Army Corps of Engineers, Fort Worth District for flood control, water supply, and recreational purposes. The Trinity River Authority has the right to use water in the conservation pool. During 1940's and 1950's, some residents and community leaders in Navarro County recognized the potential demands for water supply due to population growth and formed a small alliance devoted to preparing the dam and lake.