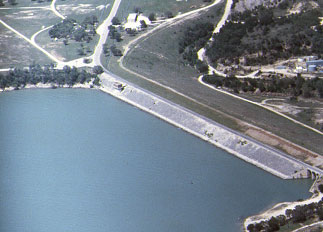 Lake Bridgeport, formerly known as Bridgeport Reservoir, is located about four miles west of Bridgeport in Wise County, on the West Fork Trinity River.  The reservoir was authorized by State Board of Water Engineers by Water Rights Permit No. 1074 (Application No. 1145) to the Tarrant County Water Control and Improvement District No. 1 (Tarrant Regional Water District) on May 1, 1928.  Construction of Lake Bridgeport and the original Bridgeport Dam started on January 23, 1930.  The dam was completed December 15, 1931 and impoundment began on April 1, 1932.

The crest of the service spillway is at elevation of 836 feet above mean sea level.  According to the TWDB 2010 volumetric survey, at this elevation, the lake has a conservation storage capacity of 361,875 acre-feet and covers a surface area of 11,712 acres.  The drainage area above the dam is 1,111 square miles.