The goal of the Coastal Hydrology program is to provide estimates of historical freshwater inflows and inflow balances for Texas bays and estuaries to support environmental and water planning studies at TWDB.  The earliest inflow estimates were compiled in a series of reports published by the Texas Department of Water Resources between 1980 and 1983 (TDWR 1980a, 1980b, 1981a, 1981b, 1981c, 1983).  Monthly inflows to the seven major estuaries in Texas for the period 1941 - 1976 were estimated in those studies.  Inflow estimates were subsequently extended to 1977 - 1987 and provided in a daily format in support of further studies on Texas's estuaries (Longley 1994).  Finally, inflow records for each of the estuaries have been updated periodically since then in support of ongoing research and planning studies both within and external to TWDB.

How are Freshwater Inflows Estimated?

Freshwater inflow comes primarily from precipitation over each estuary's drainage basin.  Runoff enters streams and rivers, makes its way to the mouth of each watershed, and eventually reaches the estuary.  Along the way, some water is diverted for human use.  Diverted water that is not consumed can be returned to the streams as return flows.

Flows throughout the State are monitored by the United States Geological Survey (USGS) stream gages.  USGS stream gages historically have been located far enough upstream from the estuary to remove them from the influence of tidal variations in water flow and level.  Downstream of these gages, between the gage and the point where the stream meets the estuary, streamflow is ungaged and must be estimated using rainfall-runoff computer models.  In some estuaries, significant runoff originates in these ungaged watersheds.

Total surface inflow from a river basin is estimated by summing flows originating in both gaged and ungaged watersheds.  Gaged flows are obtained from USGS streamflow records.  Ungaged flows are the sum of three components: (1) computed streamflow, using a rainfall-runoff simulation model (e.g., TxRR), based on precipitation over the watershed and other factors, (2) flow diverted from streams by municipal, industrial, agricultural, and other users, and (3) unconsumed flow returned to streams.

What is a Freshwater Inflow Balance Estimate?

The freshwater inflow balance consists of the estimated surface inflows plus precipitation across the estuary minus evaporation from the estuary. 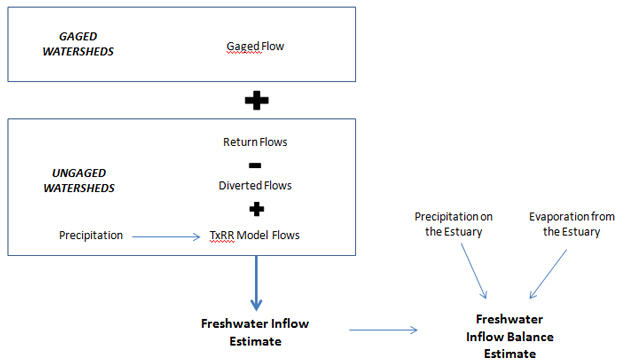 Some data used in compiling these web pages may be provisional in nature and therefore subject to change.  As a result, data presented in the current pages might differ slightly from that presented in future updates.