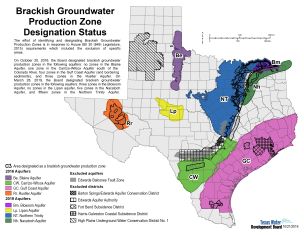 In 2019, the 86th Texas Legislature restored funding for the BRACS Program with the passage of Rider 24 in House Bill 1, which appropriated $2 million to the TWDB for contract and administrative costs to support designation of brackish groundwater production zones in aquifers of the state, excluding the Dockum Aquifer. The 86th Texas Legislature also passed Senate Bill 1041 that extended the deadline to complete zone designations from December 1, 2022, to December 1, 2032, and House Bill 722 that established a permitting framework for developing water supplies from TWDB-designated brackish groundwater productions zones.