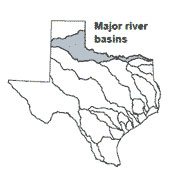 The Red River Basin is the fourth largest river basin by area within Texas.  The region's red-colored soil gives the basin's namesake river its characteristic color during high flow events.  From its headwaters in New Mexico, the Red River flows across Texas, along the Texas-Oklahoma border, and into Arkansas before reaching its confluence with the Mississippi River in Louisiana.

Smaller streams within the Texas portion of the basin include the forks of the Red River and the Pease, Wichita, and Little Wichita rivers.  The Red River Compact between Arkansas, Louisiana, Oklahoma, and Texas apportions the waters of the Red River and its tributaries.  High levels of naturally occurring chloride in some surface waters of the basin are a concern, and federally funded chloride control projects have been operating there since 1962.  In the past, the region has depended heavily on groundwater supplies, but these supplies are projected to decline in the future.