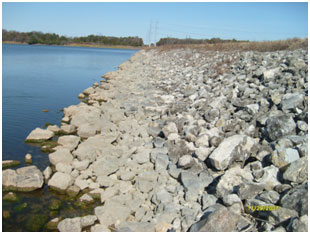 Valley Lake (also known as Brushy Creek Reservoir) is located three miles north of Savoy in Fannin County, Texas on Brushy Creek, a tributary to the Red River. The lake is in fact an off-channel reservoir because majority of source comes by pumping from Sand Creek at mouth to Red River which receives the release from Lake Texoma. The project is owned and operated by the TXU Energy for the purpose of condenser cooling and other power plant uses for its Valley Creek steam-electric generating station. Construction of Valley Dam was started on April 18, 1960, and completed on September 5, 1961. Deliberate impoundment began in December 1960. The lake has a storage capacity of 16,400 acre-feet, encompassing a surface area of 1,080 acres, at the normal elevation 611 feet above mean sea level.