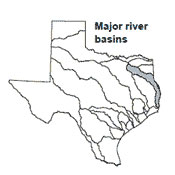 The Sabine Basin has the second largest average watershed yield of any major river basin in Texas because of the region's high precipitation and low evaporation rates.  The major river in the basin was named Rio de Sabinas or “River of the Cypress” by Spanish explorers.  Flowing from its head-waters in Hunt County, the Sabine River forms much of the border between Texas and Louisiana before draining to the Gulf of Mexico through Sabine Lake.