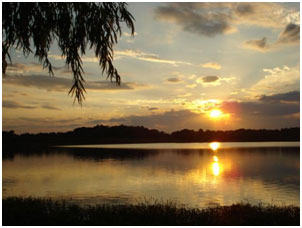 Lake Winnsboro (also known as Wood County Dam No. 4) is located about four miles southwest of Winnsboro in north central Wood County on Big Sandy Creek, a tributary of the Sabine River. The Lake is owned and operated by Wood County for flood regulation and recreational purposes. Construction of the 2,500-foot-long rolled earthfill dam, designed by Wisenbaker, Fix, and Associates and Freese and Nichols, began on June 15, 1961, and was completed on September 17, 1962. Impoundment of water began on July 1, 1962. In 1966 the crest of the service spillway was raised two feet, to an elevation of 419 feet.

The lake has a capacity of 8,100 acre-feet and a surface area of 806 acres at the service spillway crest elevation. A flood-retardation surcharge capacity of 8,170 acre-feet is provided between the crests of the service spillway at 419 feet and the emergency spillway at 427 feet above mean sea level. The drainage area of Big Sandy Creek above the dam is slightly over twenty-seven square miles.