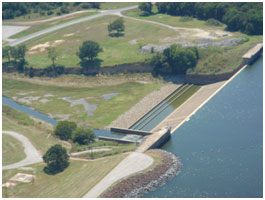 Lake Tawakoni (also known as Iron Bridge Dam) is located about nine miles northeast of Wills Point on the Sabine River in Rains and Van Zandt counties. Prior to the construction of the reservoir, the surrounding land area had been settled by ranchers and farmers following its occupation by "prehistoric Indians" and many historic Indian tribes for whom Lake Tawakoni is named. This reservoir is owned and operated by the Sabine River Authority of Texas. A permit for the reservoir construction was issued by the State Board of Water Engineers on December 20, 1955. Land acquisition was initiated in 1956 and completed in October 1960. Construction on the dam began in January 1958 and was completed in October 1960.

The Iron Bridge Dam consists of a rolled-earth embankment with an ungated concrete spillway. Total length of the dam, including the spillway, is approximately 5.5 miles. The embankment has a maximum height of 75 feet at stream bed and a crest width of 22 feet. The upstream slope of the embankment is protected from erosion by stone riprap. The top of the dam is at elevation 454 feet above mean sea level. The ungated concrete spillway is 480 feet in length with a crest elevation of 437.5 feet above mean sea level. Contained in the spillway structure are two 4 feet by 6 feet low-flow outlets and two 20-inch discharge pipes equipped with regulating valves. According to TWDB 2009 volumetric survey, the lake has a storage capacity of 871,695 acre-feet and a surface area of 37,325 acres at the spillway crest elevation of 437.5 feet above mean sea level. The 200-mile-long shoreline is in Rains, Hunt, and Van Zandt counties. The water is used for municipal, industrial, irrigational and recreational purposes. The drainage area above the dam is 756 square miles.