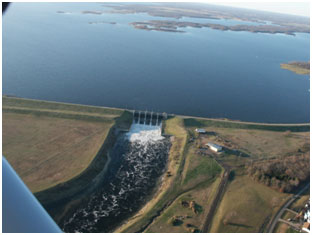 Lake Fork Reservoir is located about five miles northwest of Quitman in Wood County on Lake Fork Creek and Caney Creek, tributaries of the Sabine River. Though most of the reservoir is in northwestern Wood County, it also inundates land in Rains and Hopkins counties. The reservoir, owned by the Sabine River Authority of Texas, was constructed to conserve water for municipal and industrial use. Initial engineering studies for the dam began in the fall of 1972, and actual construction began in the fall of 1975. Final closure of the dam occurred in February 1980, and the full conservation pool was reached in December 1985. The contractor was Holloway Construction Company of Wixom, Michigan. Construction was funded through an agreement with Texas Utilities Generating Company, Inc, and the cities of Longview and Dallas that committed to buy water from the reservoir. The rolled earthfill dam is about 12,410 feet long with its top at elevation of 419.5 feet above mean sea level. Maximum design water surface may reach to 407.9 feet above mean sea level. The service spillway is concrete ogee weir located in the northeast end of the dam with a crest elevation of 385 feet above mean sea level. It is controlled by five radial tainter gates (40 feet in width and 20 feet in height) with top at elevation of 405 feet above mean sea level.

According to TWDB 2009 survey, the reservoir's storage capacity at the conservation pool elevation of 403 feet above mean sea level is 636,504 acre-feet encompassing a surface area of 26,889 acres. The drainage area controlled by the dam is approximately 493 square miles. The reservoir is a popular center for recreation, particularly fishing. In 1978 the Texas Parks and Wildlife Department began stocking the reservoir with Florida largemouth bass, and on January 24, 1992 a largemouth bass caught at the reservoir set a new state record at eighteen pounds and 2.88 ounces.