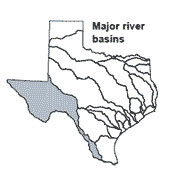 The Rio Grande Basin covers the largest area in Texas of any major river basin.  The basin's namesake river was called Rio Grande, "Big River," by early Spanish explorers.  From its headwaters in Colorado, the river flows through New Mexico and eventually joins the Rio Concho from Mexico.  The river forms the international boundary between the United States and Mexico from El Paso to the Gulf of Mexico.  The Rio Grande Basin has an extremely low average annual water-shed yield due to arid or semiarid climate conditions throughout much of the basin.

Smaller streams in the Texas portion of the basin include the Pecos and Devils rivers; Alamito, Mud, and Pinto creeks; and Arroyo Colorado.  Surface water within the basin is apportioned by the Pecos River Compact between New Mexico and Texas; the Rio Grande Compact between Colorado, New Mexico, and Texas; and the Convention of 1906 and United States and Mexico Water Treaty of 1944.