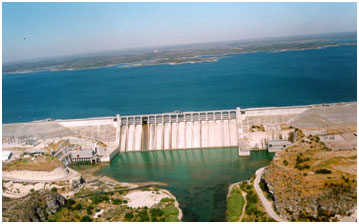 The Amistad International Reservoir is located in Val Verde County, Texas and the State of Coahuila, Mexico, with the dam approximately 12.8 river miles above Del Rio and Ciudad Acuña. The Amistad dam and lake, named for the Spanish word for “friendship”, are managed jointly by governments of the United States and Mexico through the International Boundary and Water Commission (IBWC) for flood control, water conservation, recreation, and electrical power production purposes. Penstocks were constructed at the time of dam construction in 1964-1969 and power generating plants were completed by the United States in 1983 and by Mexico in 1987.

The Amistad Reservoir is the second of the international multipurpose storage dams constructed during 1964-1969 on the Rio Grande by the United States and Mexico in accordance with the 1944 Water Treaty between the two countries. The dam is a concrete, gravity structure, with gated spillway, and flanked by an earth embankment section on each side. The total length of the dam is approximately 6.07 miles – 4.25 miles in Mexico and 1.82 miles in the United States. The concrete portion of Amistad Dam is 254 feet above the riverbed and is 2,182 feet long. The top of the dam is at elevation of 1,152.3 feet above mean sea level. Discharge over the crest of the spillway is controlled by 16 Tainter gates 50 feet wide and 54 feet high, with an elevation of 1,140.4 feet above mean sea level at the top of the gates. Maximum design water surface may reach to 1145.12 feet above mean sea level.