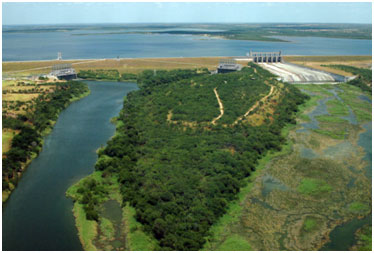 Falcon International Reservoir (also known as Falcon Lake or Dam) is located forty miles southeast of Laredo in Zapata County, on the Rio Grande. The dam and lake are managed jointly by governments of the United States and Mexico through the International Boundary and Water Commission (IBWC) for water conservation, flood control, hydroelectric energy, and recreation. The lake is named after María Rita de la Garza Falcón, for whom the town of Falcon (displaced by the creation of the reservoir) was named. The idea of a dam six miles east of the present site began about 1935, and the lake was approved by treaty at its present location in the late 1940s.