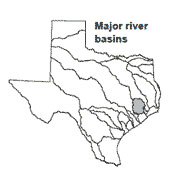 The San Jacinto Basin is one of the smallest river basins in Texas.  The basin's namesake river derives its name from the Spanish word for “hyacinth.” From headwaters in Walker County, the San Jacinto River flows southeast to Galveston Bay, which drains to the Gulf of Mexico.  Other streams within the basin include the East and West forks of the San Jacinto River; Caney, Cypress, Peach, and Spring creeks; and Luce and Buffalo bayous.