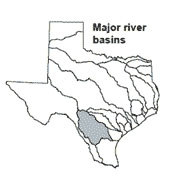 From headwaters in Edwards and Real counties, the Nueces River flows to Nueces Bay, which drains to the Gulf of Mexico.  Other streams within the basin include the Leona, Frio, Sabinal and Atascosa rivers and San Casimiro, Seco, Hondo, and San Miguel creeks.  An important issue in the Nueces Basin, exacerbated by drought, is the limited water supply.  Groundwater supplies, which have historically provided the majority of water used in the basin, are expected to decline in the future.  The basin is an important water supply for portions of the Nueces-Rio Grande Coastal Basin, including the city of Corpus Christi.