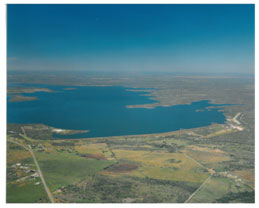 Choke Canyon Dam is located approximately 4 miles west of Three Rivers in Live Oak County, on the Frio River, a major tributary of the Nueces River.  The reservoir, extending in both Live Oak and McMullen counties, was built by the Bureau of Reclamation, and is owned and operated by the City of Corpus Christi and the Nueces River Authority for municipal water supply and recreational purposes.  Development of the Nueces River Project began with the opening of a construction office in Three Rivers, Texas on May 16, 1976.  Bids for construction of the dam were opened on May 11, 1978.