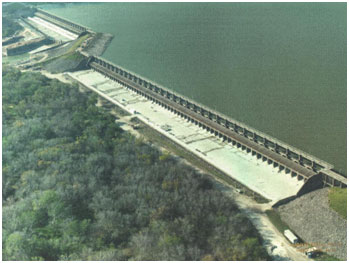 Lake Corpus Christi (also known as Wesley E. Seale Dam, Lake Lovenskiold or Lake Mathis) is located four miles west of Mathis, at the intersection of the Live Oak, San Patricio, and Jim Wells county lines, on the Nueces River.  The reservoir is owned and operated by the city of Corpus Christi for municipal water supply and recreational purposes.  Construction started on La Fruta Dam in 1927 and was completed in 1929.  The impoundment of water formed by La Fruta Dam was called Lake Lovenskiold.  A partial failure of La Fruta Dam occurred in late 1930.

According to 2012 TWDB survey, the reservoir has a capacity of 254,732 acre feet encompassing a surface area of 18,700 acres at the conservation pool elevation of 94.0 feet above mean sea level.  The drainage area above the dam is approximately 16,656 square miles.