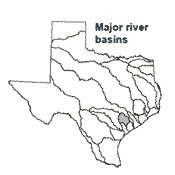 The Lavaca Basin covers the smallest area of the major river basins of Texas.  The basin's namesake river derives its name from the Spanish word for "cow." From its headwaters in Gonzales County, the Lavaca River flows to Lavaca Bay, which drains to the Gulf of Mexico.  Other streams within the basin include the Navidad River, Sandy Creek, and East and West Mustang creeks.  Groundwater supplies have historically provided the majority of water used in the basin.  The Lavaca Basin is an important water supply to coastal areas outside the basin that are experiencing population growth and increased demands for water.