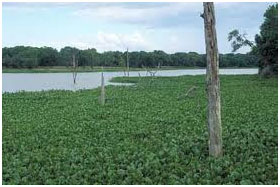 Lake Texana (also known as Palmetto Bend Dam and Reservoir, Stage I) is located seven miles east of Edna in Jackson County, on the Navidad River, a major tributary to Lavaca River.  Lake Texana is named after the ghost town of Texana which the lake merged.  The project originally derives its name from the dwarf palmetto (Sabal minor), a common bottomland plant in the area.  The lake and dam are managed by the Lavaca-Navidad River Authority for municipal and industrial water supply and recreational purposes.  The Congress of the United States authorized the Palmetto Bend Reclamation Project in October, 1968 (P.L. 90-562; 82 Stat. 999), and by a later action changed the name of the reservoir to Lake Texana.  Water Rights Permit (No. 2776) was granted to the Lavaca-Navidad River Authority (LNRA) and the Texas Water Development Board (TWDB) for reservoir on May 15, 1972.  Construction of the dam by the United States Bureau of Reclamation begun in 1976 and was completed in 1979.  Deliberate impoundment of water began in May 1980.  The dam is a rolled earth-filled structure 41,712 feet in length with a maximum height of 58 feet. The top of the dam is at elevation 55 feet above mean sea level. Maximum design water surface may reach to 47 feet above mean sea level. The spillway is controlled by 12 radial gates, each 35 feet wide and 22.61 feet tall with the top of the gates at elevation 45 feet above mean sea level. Sill of the gate or the crest of concrete ogee is at elevation of 22.39 feet above mean sea level. According to TWDB 2010 survey, the reservoir can store 159,845 acre-feet of water and encompass a surface area of about 9,676 at the conservation pool elevation of 44 feet above mean sea level.  The dam controls a drainage area of approximately 1,404 square miles.