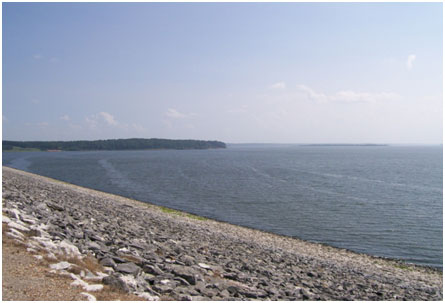 Wright Patman Lake (formerly known as Texarkana Reservoir or Lake Texarkana) is located about eleven miles southwest of Texarkana in Bowie and Cass Counties, TX on the Sulphur River, a tributary of the Red River in Arkansas.  As a part of the comprehensive flood control plan on the Red River below Denison Dam, Texarkana Dam and Reservoir was authorized by the Flood Contract Act of 1946 (Public Law 526, 79th Congress, 2nd Session) and was constructed beginning on August 20, 1948.

The Sulphur River was blocked and water was routed through the control structures on July 2, 1953.  The reservoir had been operated as a temporary detention basin until June 27, 1956, at which time the gates were closed and intentional impoundment was started.  On December 15, 1973, President Nixon signed H.R. 945, officially designating the project as "Wright Patman Dam and Lake" in honor of Congressman John William Wright Patman (1893-1976) of the First Congressional District of Texas.  The lake is owned by the United States Government and is operated by the United States Army Corps of Engineers.  The drainage area of 3,400 square miles above the dam site covers approximately 91 percent of the Sulphur River Basin above the Red River.

To maximize the benefit of the lake beside the flood control function, the conservation pool elevation is variably increased in spring and summer since it also supplies water to Texarkana, an expanding city on Texas-Arkansas border.  Texas Water Development Board did volumetric survey during December 1996 and January 1997 and provided updated following capacity information (TWDB, 2003). At defined conservation pool elevation, 220.6 feet above mean sea level, the lake can store 97,927 acre-feet of water encompassing a surface area of 18,247 acres. The lake is operated under seasonal pool levels varied between 220.6 and 227.5 feet above mean sea level.