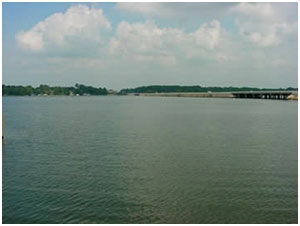 Lake Palestine and Blackburn Crossing Dam are located about four miles east of Frankston, in northeastern Anderson, southeastern Henderson, southwestern Smith, and northwestern Cherokee counties on the Neches River.  The dam is owned and operated by the Upper Neches River Municipal Water Authority for industrial, municipal, and recreational purposes.

Lake Palestine and Blackburn Crossing Dam were originally authorized under Permit No. 1832 (Application No. 1975) by the State Board of Water Engineers to the Upper Neches River Authority on July 12, 1956.  Construction of the original dam started in 1960 and was completed on June 13, 1962.  An enlargement project begun in 1969 and was completed on March 3, 1971.  Lake Palestine is formed by an earthfill dam approximately 5,720 feet long and 75 feet high above streambed with the top of dam at the elevation of 364 feet above mean sea level. Maximum design water surface may reach to 355.3 feet above mean sea level. The uncontrolled emergency spillway is located near the left end of the dam and is a concrete ogee weir of 500 feet in length with the crest at elevation 345 feet above mean sea level. The service spillway is located near the center of the dam and is gate-controlled concrete tower with two (5 by 7 feet) rectangle openings and connected to a 8.5 feet diameter conduit through the dam for discharge. The crest of service spillway is at elevation of 298 feet above mean sea level. According to Texas Water Development Board 2012 Survey, the storage capacity is 367,312 acre-feet with a surface area of 23,112 acres at the conservation pool elevation of 345 feet above mean sea level.  The drainage area above the dam is approximately 839 square miles.