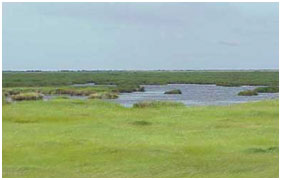 J. D. Murphree Wildlife Impoundments (also known as J. D. Murphree Wildlife Management Area Impoundments or Big Hill Dam/Reservoir or Compartment Levees) are located south of Port Acres in Jefferson County.  They are off-channel storages between the Taylor Bayou and the Gulf Inter-coastal Waterway, which are tributaries of the Sabine-Neches Canal.  These impoundments are owned and operated by the Texas Parks and Wildlife Department (TPWD) for wildlife refuge and recreation. The impoundments are parts within the wildlife management area which were purchased in 1950 from the William Perry Herring McFaddin heirs.

The impoundments were named in honor of J.D. Murphree a fallen Texas Game Warden who was murdered by a duck poacher in Jasper County in 1963.  The murderer was apprehended, convicted of manslaughter and given a prison term.  Construction of the levees started in September, 1959 and impoundment began in 1960.  By 1964, a total of 11 compartments were implemented.  To date, there are a total of 13 compartments.  The J. D. Murphree Wildlife Management Area is a 24,250 acre tract of fresh, intermediate, and brackish water within the prairie-marsh zone along the upper coast of Texas.  These wetlands are part of the Texas Chenier Plain, the westernmost geologic delta of the Mississippi River.  Three distinct units exist: the Big Hill Unit (8,312 acres), the Hillebrandt Unit (591 acres), and the Lost Lake Unit (4,074 acres). At an elevation of 2 feet above mean sea level, this lake can store 32,000 acre-feet of water.