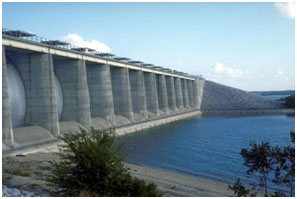 Waco Lake is located about two miles west of Waco in McLennan County, on the Bosque River, a tributary of the Brazos River.  The lake is owned The U.S. Government and operated by the United States Army Corps of Engineers for purposes of municipal, industrial water supply, flood control, conservation and recreation.  The water rights are allocated to the City of Waco and the Brazos River Authority.  The original Waco Dam was constructed by the city in 1928-1929.  Originally, the lake had a storage capacity of 39,378 acre-feet, but by the mid-1940s the accumulation of sediments had reduced its capacity to 22,030 acre-feet.  Meantime, the floods threat to the city of Waco and downstream portions of the Brazos River.  Therefore, a new reservoir was proposed.  The new Waco Lake was authorized for construction under the Flood Control Act approved 3 September 1954.  Construction of this lake began in June 1958, and deliberate impoundment of water began February 1965.  The new Waco Dam was an earthfill structure, 24,618 feet long and 140 feet high, with a concrete spillway 560 feet wide. The top of the dam is at elevation of 514.6 feet above mean sea level. Maximum design water surface may reach to 505 feet above mean sea level. The top of flood control pool is defined at the elevation of 500 feet above mean sea level. The spillway consists of an ogee gate controlled reinforced concrete weir.  Its crest base for minimum water flow is at elevation 465 feet above mean sea level and is 560 feet in length.  Fourteen tainter gates, each 40 feet wide and 35 feet high, are mounted on the crest. Therefore, the top of the gates is at elevation of 500 feet above mean sea level.  The outlet works consists of a reinforced concrete structure located on the upstream side of the dam, with a 20-foot diameter conduit passing under the dam. The new lake, completely submerging the old lake, has a conservation storage capacity of 189,773 acre-feet encompassing a surface area of 8,190 acres at the elevation of 462 feet above mean sea level.  The drainage area above the dam is 1,670 square miles.