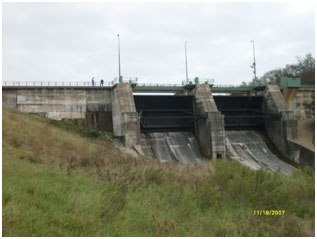 Tradinghouse Creek Reservoir is located about nine miles east of Waco in McLennan County, on Tradinghouse Creek, a tributary of Tehuacana Creek, which is a tributary of the Brazos River.  The reservoir is owned and operated by the Texas Power and Light Company for industrial (cooling and condensing for electric generating plant) and recreational purposes.  Water Right Permit (No. 2250) was issued by the State of Texas on January 16, 1967.  Construction of the dam by the general contractor, Amis Construction Company, began on February 13, 1967 and was completed on September 24, 1968.  Deliberate impoundment of water began on July 5, 1968.  The dam is an earthfill embankment of 7,600 feet long including a service spillway, plus a 1,500-foot uncontrolled emergency spillway.  The reservoir has a storage capacity of 37,814 acre-feet encompassing a surface area of 2,010 acres at its conservation pool elevation of 447 feet above mean sea level.  The drainage area above the dam is thirty-nine square miles.  The owner is allowed to pump water from the Brazos River in the event that the water level of the reservoir becomes too low to operate.