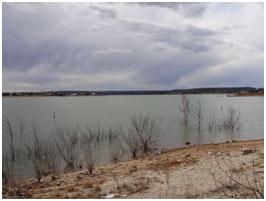 Lake Sweetwater is located about 5 miles southeast of Sweetwater in Nolan County, on the confluence of Cottonwood Creek and Bitter Creek, a tributary of the Sweetwater Creek which is a tributary to Clear Fork Brazos River which is tributary to the Brazos River.  The lake is owned and operated by the City of Sweetwater for municipal and industrial water supply and recreational purposes.  Authorization (Water Right Permit No. 1053) for the reservoir was issued by the State of Texas on January 23, 1928.  Construction of the dam began in 1928 and was completed by 1930.  Deliberate impoundment of water started in the same year.  The earthfill dam is 2,600 feet long, 350 feet wide at its base and 70 feet high at its highest point, with a twenty-foot roadway across its top. The top of the dam is at an elevation of 2,128.8 feet above mean sea level. The spillway is located near the left end of the dam and has an uncontrolled, ogee, concrete crest 607.5 feet long at an elevation of 2,116.5 feet above mean sea level. The lake has a capacity of 11,900 acre feet encompassing a surface area of about 630 acres, at its conservation pool elevation of 2,116.5 feet above mean sea level.  The dam controls a drainage area of approximately 104 square miles.