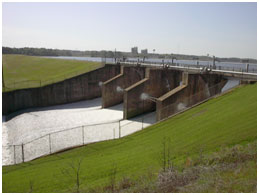 On June 18, 1956, Permit No. 1830 amended the original permit changing the location of the dam.  In subsequent years, a one-foot stop log was added to the top of the tainter gates to increase the conservation pool elevation to 293.0 ft. Construction of Striker Creek dam began July 23, 1956. The designing engineers were J. M. Lloyd and Associates, W. H. Wolverton, and Freese and Nichols.  The general contractor was Markham & Brown - McMullen & Larson.  Deliberate impoundment of water began May 1, 1957 and the dam was completed July 1, 1957.  The District sells water for industrial use to Luminant Energy, which operates a power plant on the western shore of the reservoir.

The District will also provide cooling water for Southern Company's new biomass fired power plant in Sacul, which is about 10 miles southeast of the lake.  The City of Henderson also has an option on water from Lake Striker for future use.  The dam is an earthfill structure, 2,400 feet in length (including the service spillway) and has a height of 42 feet above the natural streambed.  The crest of the dam is 25 feet wide at elevation 309.0 feet.  The emergency spillway is an earth-cut channel located at the right end (west) of the dam's embankment.

It has a crest length of 600 feet at elevation 294.0 feet.  The service spillway is a concrete ogee type structure consisting of four tainter gates, each 35 feet wide by 10 feet high, with an additional 1 foot stop log on top of each of the gates.  The crest of the service spillway is 140 feet long at elevation 282.0 feet.  The low-flow outlet is a valved, controlled 24 inch concrete pipe with an invert elevation of 282.0 feet.  The discharge is into the channel of the service spillway.  Records indicate the watershed for Striker Creek Reservoir is approximately 182 square miles. According to TWDB volumetric survey, the lake has storage capacity of 22,865 acre-feet, encompassing a surface area of 1,920 acres, at its conservation pool elevation 293 feet above mean sea level.