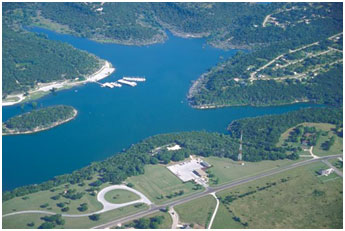 Stillhouse Hollow Lake and Dam (formerly Lampasas Dam) are located 5 miles southwest of Belton in Bell County, on the Lampasas River, a tributary of the Little River which is a tributary to the Brazos River.  The project is owned by the United State Government and managed by the U. S. Army Corps of Engineers for flood control, multi-purpose water supply and recreation.  Flood Control Act approved September 3, 1954 (PL 83-780) (HD 535/81/2) allowed the construction of Lampasas Lake.  The name of the lake was changed by PL 86-307 from "Lampasas" to "Stillhouse Hollow".  Water Right Permit (No. 2109) to impound and appropriate the water was issued by the State of Texas on July 24, 1964.  Construction began on June 11, 1962 and was completed in July 1968.  Deliberate impoundment began on February 19, 1968.  The dam is a rolled earthfill embankment of 15,624 feet long, including spillway and dike. The top of the dam is at elevation of 698.0 feet above mean sea level. Maximum design water surface may reach to 693.2 feet above mean sea level. The uncontrolled emergency spillway is broad-crested weir cutting on natural ground to the south (right) side of the dam and has a length of 1,650 feet and an elevation of 666.0 feet above mean sea level. According to TWDB 2005 survey, the reservoir has a capacity of 227,825 acre-feet and a surface area of 6,484 acres at the conservation pool top elevation of 622 feet above mean sea level.  Based on U. S. Geological Survey topographic maps dated 1958, the original capacity at the top of the flood control storage space at the spillway crest elevation of 666 feet above mean sea level was 630,400 acre-feet, and the surface area was 11,830 acres.  The drainage area above the dam is 1,318 square miles.