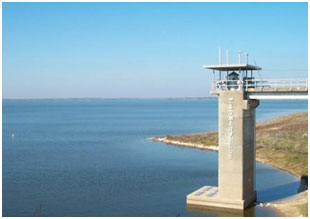 Somerville Lake is located about two miles south of Somerville in Burleson County and extends into Washington and Lee counties, on Yegua Creek (and its tributaries), a tributary of the Brazos River.  The lake is owned by the United State Government and operated by U.S. Army Corps of Engineers for flood control, water conservation, and other beneficial uses.  Authorizations for the dam and reservoir was issued by Congress in the Flood Control Act of September 3, 1954 (Public Law 780, 83rd Congress, 2nd Session), and by the State of Texas in Water Rights Permit (No. 2295) on July 24, 1964.  Construction of the dam began June 4, 1962 and was completed on October 27, 1967.  Deliberate impoundment started January 3, 1967 and the reservoir received its official dedication on May 17, 1968.  The dam is a rolled earthfill embankment of 20,210 feet long plus 4,715 feet dike at right of spillway.  The top of the dam is at elevation of 280 feet above mean sea level. The maximum design water surface may reach up to 274.5 feet above mean sea level. The uncontrolled emergency spillway is located at the right side of the dam and is a type of concrete ogee weir with a crest of 1,250 feet in length at an elevation of 258 feet above mean sea level. Based on data from U. S. Army Corps of Engineers, at this elevation (258 feet) where the top of flood control pool is defined, the reservoir has a total storage capacity of approximately 507,500 acre feet encompassing a water surface area of some 24,400 acres. According to TWDB 2012 volumetric survey, at the conservation pool elevation of 238 feet above mean sea level, the lake has a capacity of 150,293 acre feet and a surface area of 11,395 acres.  The dam controls a drainage area of about 1,006 square miles.