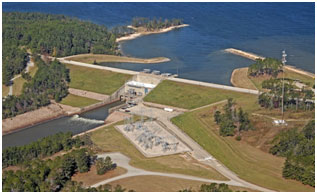 Sam Rayburn Dam and Reservoir is located approximately ten miles northwest of the town of Jasper, in the heart of the piney woods region of Southeast Texas on the Angelina River, the largest tributary of the Neches River.  The Congress in 1955 authorized the construction of the dam for flood control, hydroelectric power generation, and conservation of water for municipal, industrial, agricultural, and recreational uses as the second element of the U.S. Army Corps of Engineers development plan for the Neches River Basin.

The construction began in 1956, and deliberate impoundment of water began in March, 1965.  The full conservation pool was reached in 1966.  When the construction of the dam began, the project was known as "McGee Bend Dam and Reservoir", because of its' location immediately upstream from McGee Bend on the river.  In September, 1963, the 88th Congress adopted a special resolution changing the name to "Sam Rayburn Dam and Reservoir", in honor of the recently deceased Speaker of the U.S. House of Representatives Sam Rayburn, a long-time champion of soil and water conservation, including the promotion on the Lake Texoma project and so on.  Dedication ceremonies were held on May 8, 1965, with President Lyndon B. Johnson delivering the principal address by telephone from the White House.