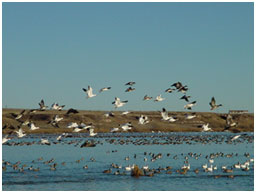 Rita Blanca Lake is located about three miles south of Dalhart in Hartley County, Texas, on Rita Blanca Creek, a tributary of the Canadian River.  It was initially built for flood control purposes in the Rita Blanca-Carisso creeks drainage area by the U. S. Soil Conservation Service in association with the Panhandle Water Conservation Authority in 1938-1939.  The State Board of Water Engineers granted Permit No. 1267 (Application No. 1355) in 1938 that also allowed for recreational use of the reservoir.  There was little water stored in the reservoir until May 1941, when the reservoir filled to three-fourths capacity.  The dedication ceremony for the reservoir took place on July 20, 1941.  In September 1941, heavy rain fall filled the lake and the spillway was used for the first time.  Unfortunately, the flood caused considerable damage to the spillway retaining walls and floor slab.  In June 1951, the City of Dalhart obtained a ninety-nine-year lease for operation of the project as a recreational facility without any right of diversion. In 1960 the administrative authority was transferred to the United States Fish and Wildlife Service from the U. S. Soil Conservation Service. At the conservation pool elevation of 3,860 feet above mean sea level, the lake can store 12,050 acre-feet of water encompassing a surface area of 524 acres. The dam controls a drainage area of approximately 1,062 square miles.