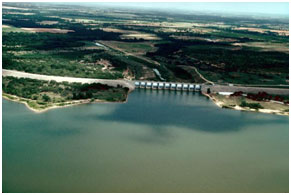 Proctor Lake is located approximately three miles northwest of the city of Proctor in the Comanche County, on Leon River, a tributary of the Little River which is a tributary to the Brazos River.  The lake was built, and is owned by the United State of America and operated by the U.S. Army Corps of Engineers for flood control, water supply and recreational purpose. Authorization of the dam was issued by Federal Flood Control Act 1954, and the Public Works Appropriations Act of 1957.  Construction began in June 1960 and was placed in operation in 1963. The earth-filled dam, including spillway, is 13,460 feet long with a maximum height of 86 feet above the streambed. The top of the dam is at elevation of 1,206 feet above mean sea level. Maximum design water surface may reach to 1,201 feet above mean sea level. The spillway is concrete ogee weir controlled by eleven tainter gates, each 40 feet wide and 35 feet tall and the crest is at elevation of 1,162 feet above mean sea level. Based on data from 1946 survey, at top of flood control pool, elevation 1,197 feet above mean sea level, the lake will cover 14,010 acres and store 374,200 acre-feet water.  According to TWDB 2012 volumetric survey, at the top of conservation pool, elevation 1,162 feet above mean sea level, the lake has a capacity of 54,762 acre-feet encompassing a water surface of 4,615 acres.  The dam controls a drainage area of about 1,265 square miles.