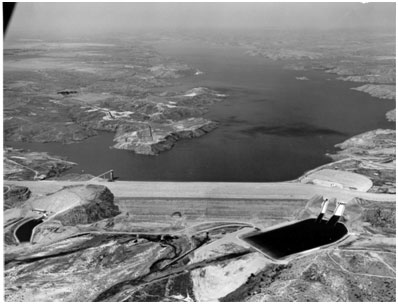 Lake Meredith is formed by Sanford Dam on the Canadian River at Sanford, Texas and is located about 37 miles northeast of Amarillo in the Texas Panhandle.  In the 1920's, Austin A. Meredith recognized the need for a reservoir on the Canadian River to supply water to cities in the Texas Panhandle.  He continuously promoted the project in numerous speeches thereafter and was foremost among the organizers of the Canadian River Water Users Association where he served as Executive Secretary.  Meanwhile, flood and water related problems in 1930s in the Canadian River basin had attracted the attention of the United States Army Corps of Engineers (USACE) who conducted investigations in 1946 which recommended a large reservoir situated on the Canadian River somewhere in Texas.  Major progress on this project was made after surveys of the basin by the Bureau of Reclamation (USBR), initiated in 1941 but suspended due to World War II, and resumed in 1947.  USBR subsequently wrote a report which also recommended the Sanford Dam Project in 1949 (USBR, 1949).  The project was authorized by Public Law 898-81 passed by Congress and signed by President Harry S. Truman on December 29, 1950.  Operations of Sanford Dam are governed by the Canadian River Compact signed by the representatives of Texas, Oklahoma, and New Mexico on December 6, 1950, and ratified and approved by the United States Congress under Public Law 345, 82nd Congress, 2nd Session on June 2, 1952.  Designed by the engineers from the U.S. Bureau of Reclamation and financed mainly by the U.S. Federal Government, Sanford Dam was constructed from March 11, 1962 to August 21, 1965.  Deliberate impoundment began on January 28, 1965.  The lake was called Sanford Reservoir until 1974, when it was renamed by Congress in remembrance of the late Mr. Austin A. Meredith, who died of cancer in April 1963, two years before the project's completion (Stene, Eric A., 1995). Based on design data from the U.S. Bureau of Reclamation, the elevation of the top of dam is 3,011 feet above mean sea level with an uncontrolled spillway crest at an elevation of 2,965 feet above mean sea level. At the latter elevation, the reservoir can hold a total of 1,407,600 acre feet of water encompassing a surface area of approximately 21,639 acres. The designed maximum flood water level is 3,004.9 feet above mean sea level. According to TWDB 1995 volumetric survey, the lake has a storage capacity of 817,970 acre-feet, encompassing a surface area of 16,411 acres, at its conservation pool elevation of 2936.5 feet above mean sea level.