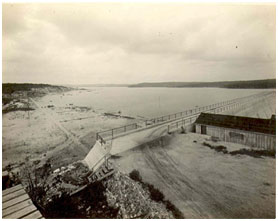 Medina Lake is located approximately eight miles northwest of Riomedina in Medina County, on the Medina River, a tributary (or upstream) of The San Antonio River. The lake extends into Bandera County. It is owned and operated by the Bexar-Medina-Atascosa Counties Water Improvement District No. 1 (BMA) for irrigational, municipal, industrial and recreational purposes. The project was built by the Medina Valley Irrigation Company (former BMA) under a Declaration of Appropriation filed November 16, 1910, which was converted to Certified Filling No. 18 by the State Board of Water Engineers on February 14, 1914.