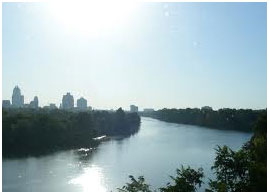 Lady Bird Lake (formerly Town Lake) and Longhorn Dam are located in City of Austin in Travis County, on the Colorado River.  The project is owned and operated by the City of Austin in cooperation with the Lower Colorado River Authority for cooling to the Holly Street Power Plant (but closed on September 30, 2007), flood control, water supply, wildlife protection and recreational purposes.  Construction of the dam began in April 1959 and was completed in 1960.  Deliberate impoundment of water began at the same time.  Longhorn Dam is an earthfill embankment of 760 feet long, including 506 feet of concrete service spillway.  According to 2008 TWDB volumetric survey, Lady Bird Lake has a storage capacity of 7,151 acre-feet and encompasses 465 acres at conservation pool elevation, 428.6 feet above mean sea level.  On July 26, 2007, the Austin City Council passed a resolution authorizing the renaming of the reservoir from Town Lake to Lady Bird Lake in honor of Lady Bird Johnson, the former First Lady of the United States and a long-time resident of the Austin area who had died earlier that month.  Johnson had declined the honor of having the lake renamed for her during her life.  In renaming the lake, the City Council recognized Johnson for her dedication to beautifying the lake and her efforts to create a recreational trail system around the lake's shoreline.  Drainage area above the dam is about 157.5 square miles, excluding drainage area controlled by upstream reservoirs.