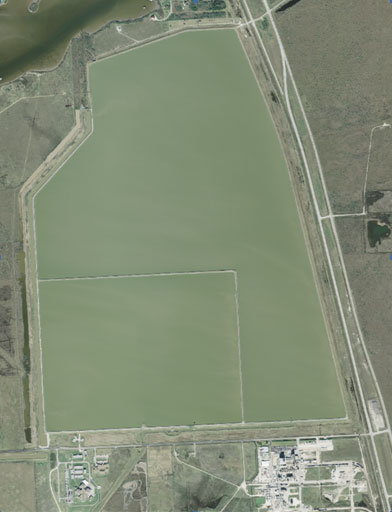 The dam, originally designed by Ford, Bacon, and Davis, Inc. was completed in 1948.  The dam is of a homogeneous earth-fill construction with a maximum height of 14 feet and a length of 25,281 feet.  The reservoir has a maximum capacity of 11,368 acre feet.  Normal storage is 7,360 acre feet with approximately 859 acres of water surface at the elevation of 18.2 feet above mean sea level.  The water originates from two pumping plants located near Richmond on the Brazos River in Fort Bend County and travels through canal system in Ft. Bend, Brazoria, and Galveston Counties before it reaches the reservoir.  The canal system today consists of three interconnected canals: the American Canal System which was constructed in 1908 and expanded in 1931; the Briscoe Canal System which was constructed in 1940; and the Chocolate Bayou Canal System.  However, the reservoir itself only drains an area of 1.27 square miles.