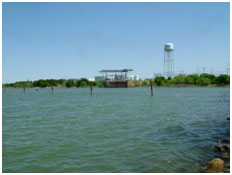 Lake Graham is unique in that it is basically two lakes, Lake Eddleman and Lake Graham, connected by a canal.  Lake Graham is located about two miles northwest of Graham in Young County.  Eddleman Dam was built on Flint Creek in 1928 while Graham Dam was built on Salt Creek in 1958.  Both creeks are tributaries of the Brazos River.  The two lakes were connected via canal sometime after June of 1959.  The project is owned and operated by the City of Graham. According to Handbook of Texas Online, "The lake was probably named for the brothers Edwin S. and Gustavus Graham, who purchased 125,000 acres of land near Graham in 1871."  Records indicate the construction for the original Eddleman Dam started in 1928 and was completed in 1929.  Deliberate impoundment of water began that same year.  Freese and Nichols were the design engineers and Womack-Henning Construction Company was the general contractor.  The construction for Graham Dam started on September 17, 1956 and was completed in July of 1958. During this construction phase, work began in 1957 and ended in 1958 to the raise the height of Eddleman Dam.  Deliberate impoundment of water began April 28, 1958.  Freese and Nichols were the design engineers and Weldon C. Jourdan was the general contractor. The top of the earthfill dam is at elevation of 1,093.3 feet above mean sea level. The uncontrolled emergency spillway is cut in the natural ground with crest at elevation of 1,076.3 feet above mean sea level. Although the maximum capacity is estimated at 195,000 acre-feet, Lake Graham contains a volume of 45,302 acre-feet water encompassing 2,444 surface acres at the conservation pool elevation of 1075.0 feet.  The drainage area is approximately 221 square miles.