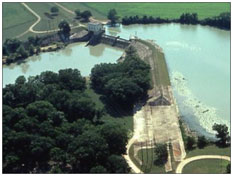 Lake Gonzales (also known as H-4 Dam or H-4 Reservoir) is located six miles northwest of the City of Gonzales in Gonzales County, on the Guadalupe River.  The Lake is currently owned by Guadalupe-Blanco River Authority for hydro-electric power generation, water conservation and recreational purposes.  Authorization (Permit No. 1096) for this project was issued by the State Board of Water Engineers on June 12, 1929.  Construction of the dam started in 1929 and was completed in 1931 by Texas Hydro-Electric Corporation.  Deliberate impoundment of water and power generation began at that time.  The dam is an earthfill embankment with a steel and sheet-pile core wall of 5,100 feet long including powerhouse and gate-controlled concrete spillway.  The lake has a capacity of 6,500 acre-feet encompassing a surface area of 696 acres at the conservation pool elevation of 332 feet above mean sea level.  The drainage area above the dam is 2,048 square miles.  The water level has been partly regulated by release from the Canyon Reservoir and other lakes upstream since June 1964.