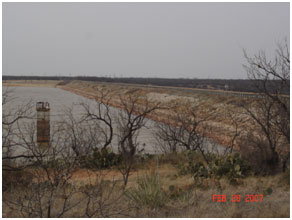 Lake Fort Phantom Hill is located about five miles south of Nugent in southeastern Jones County, on Elm Creek, a tributary of the Clear Fork Brazos River, which is a tributary to the Brazos River.  The city of Abilene owns and operates the lake for municipal, industrial, and recreational purposes.  Construction began in June 1937 and was finished in October 1938.  Hawley, Freese and Nichols designed the dam and Cage Brothers and J. C. Ruby were the general contractors.  The earthfill embankment is approximately 3,740 feet with a maximum height of 84 feet and the top of the dam at an elevation of 1,650 feet above mean sea level.  The uncontrolled service spillway is natural ground with an 800 foot long concrete ogee crest at an elevation of 1,635.9 feet above mean sea level.  The outlet works consist of a concrete tower with a 4 feet by 7 feet conduit. Floodwater inflow is partly regulated by three upstream reservoirs. According to TWDB 1993 volumetric survey, the lake covers a surface area of 4,213 acres and provides a storage capacity of 70,036 acre feet at the elevation of 1,635.9 feet above mean sea level.  The reservoir drains a basin of about 470 square miles.  In recent years, additional water from the Clear Fork and Deadman Creek has to be diverted to the lake in order to meet the needs of the area's growing population.  In July 1974, West Texas Utility Company began operating a power plant on the reservoir.