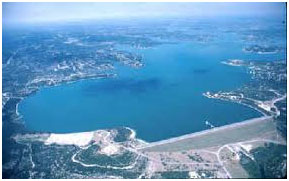 Canyon Lake located approximately twelve miles northwest of New Braunfels in Comal County, on the Guadalupe River.  The project is owned by the United State government and is operated by the U.S. Army Corps of Engineers for flood control, hydropower generation, water supply and recreational purposes.  The United States Congress passed the River and Harbor Act of 1945 and authorization was granted for the construction of the dam. Water Rights Permit No. 1886 (Application No. 1964) was granted to the Guadalupe-Blanco River Authority (GBRA) on January 22, 1959 by the State Board of Water Engineers.  Construction began in 1958 and was finished in 1964.  It is the highest earthen dam built by the Corps of Engineers in Texas, rising 224 feet above streambed and having an overall length of 4,410 feet. The top of the dam is at elevation of 974.0 feet above mean sea level, while maximum design water surface may reach to 969.1 feet above mean sea level. This project has an uncontrolled emergency spillway that is 1,260 feet long on the right saddle with a crest at elevation of 943.0 feet above mean sea level. TWDB calculated after 2000 survey based 1972 survey data from U.S. Army Corps of Engineers, at top of flood control pool, elevation 943.0 feet above mean sea level, the lake would store 733,517 acre-feet water encompassing an unchanged/uncalculated original surface area of 12,890 acres.  According to TWDB 2000 survey, the lake has a total storage capacity of 378,852 acre-feet encompassing a surface area of 8,308 acres at conservation pool elevation, 909.0 feet above mean sea level.  The dam controls a drainage area of approximately 1,432 square miles.