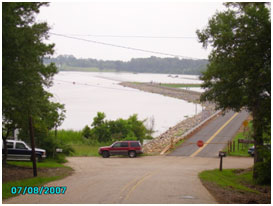 Caddo Lake is located about twenty nine miles northeast of Marshall near the border between Texas and Louisiana, in northern Harrison County and southern Marion County in Texas and western Caddo Parish in Louisiana.  The lake, on the main stem of Cypress Bayou, is named after the Southeastern culture of Native Americans called Caddoans or Caddo, who lived in the area until their expulsion in the 19th century.  In 1811 New Madrid, Missouri had an earthquake that measured 8.9.  This could have knocked down enough trees to form the great raft that dammed the Red River near Shreveport and formed Caddo Lake.  Lake Caddo is one of Texas' few non-oxbow natural lakes and is the 2nd largest natural lake in the South, before it was artificially altered by a dam constructed by the Gulf Refining Corporation near Mooringsport, Louisiana in 1914, in order to raise the water level to accommodate drilling equipment when oil was found under the water.  Caddo Lake then became the site of the first over-water oil well in the world.  The replacement of the original Caddo Dam was begun August 7, 1968 and completed by the U. S. Army Corps of Engineers on June 18, 1971.  Impoundment of water was maintained during the construction of the new dam. The top of the dam is at elevation of 176 feet above mean sea level, There are two sections of the uncontrolled emergency spillway. The high section bears a crest elevation at 170.5 feet above mean sea level while the low section has a crest at elevation of 168.5 feet above mean sea level. This reservoir is owned and operated by the Northeast Texas Municipal Water District for water supply, water conservation, wildlife protection and recreational purposes.  In 1993, in an attempt to block the construction of a barge canal through the lake, environmentalists secured recognition of Caddo Lake as an international wetlands site under the RAMSAR treaty, the thirteenth such site in the United States. According to information from TWDB Report 126, the lake has a storage capacity of 129,000 acre-feet, encompassing a surface area of 26,800 acres, at the conservation pool elevation, 168.5 feet above mean sea level. The dam controls a drainage area of approximately 2,700 square miles.