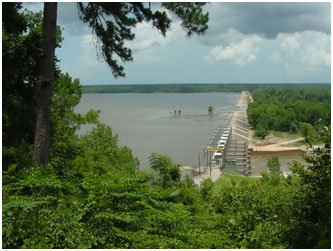 The dam, originally identified as "Dam B", was authorized by the River and Harbor Act of 1945 (Public Law 14, 79th Congress, 1st Session).  In July, 1967, "Dam B" was renamed Town Bluff Dam and B. A. Steinhagen Lake.  Town Bluff Dam is derived from being in the close proximity of the Tyler County of that name.  B. A. Steinhagen was a prominent citizen of Beaumont, Texas who was active in initial planning, authorization, and other water conservation activities.

Named in memory of Willis who served as executive director of Sam Rayburn Municipal Power Agency from May 1980 to May 1988, the Robert D. Willis Hydropower Project construction started in March, 1987 and the hydropower facilities became available for commercial operation on 17 November 1989.  The Lower Neches Valley Authority (LNVA) is also authorized to draw from the lake a maximum of 2,000 cubic feet per second for water supply purpose.  If the lake's normal pool capacity is not adequate to satisfy the requirements over an extended period of time, Sam Rayburn Dam can release conservation water into B. A. Steinhagen Lake, which will in turn release the water to meet downstream demands.