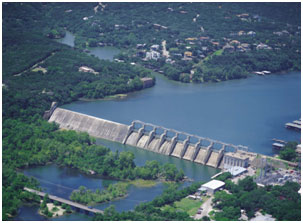 Lake Austin and Tom Miller Dam are located in the west portion of Austin in Travis County, on the main stem of Colorado River.  The dam was named for Robert Thomas Miller, a former Mayor of Austin.  The city of Austin owns the dam and lake for flood control, hydroelectric power generation, municipal water supply and recreational purposes.  The facilities is currently leased and operated by the Lower Colorado River Authority.  The original Austin Dams and McDonald Lake were built following many reports advocating its construction as earlier as 1880.  The first dam was constructed from 1890 to 1893 and the second was built from 1909 to 1912.  Both dams were damaged in massive floods in later years especially on June 15, 1935.  Construction of the present dam and power facilities began on July 5, 1938 and was completed 1939.  Deliberate impoundment started in 1939.  Power generation occurred on March 31, 1940.  The Tom Miller Dam is made up of a gravity overflow section, rebuilt hollow dam with gated spillway, powerhouse, and earth and rockfill sections.  The top of the dam is at elevation of 519 feet above mean sea level. The total length is about 1,590 feet with a maximum height of 85 feet at the top of overflow (emergence spillway and top of the gate) section with an elevation of 492.8 feet above mean sea level.  According to TWDB 2008 survey, the lake has a conservation storage capacity of 24,644 acre-feet encompassing a surface area of 1,589 acres at the top elevation of conservation pool, 492.8 feet above mean sea level. The catchment area above the dam is 38,240 square miles, of which 11,900 is probably noncontributing.  The flow into Lake Austin is basically controlled/regulated by reservoirs in the upstream.